Google has announced it will begin shipping a limited number of Google Glass prototypes to developers in early 2013. Today Google co-founder Sergei Brin announced that developers attending this year’s Google I/O conference would be able to pre-order units for $1500. 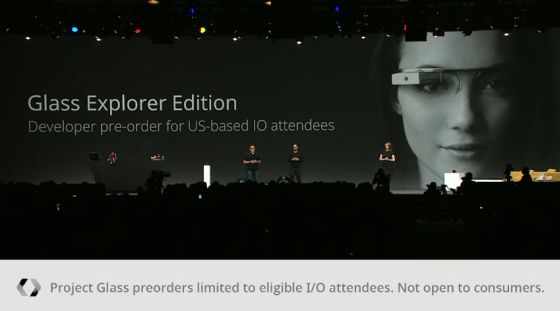 Google Glass is a head-mounted, Android-powered mobile computing device that you wear like a pair of glasses. They don’t look nearly as ugly as your typical head-mounted virtual reality display, thanks to a small transparent display that actually hangs out a little above one eye.

The company says the latest prototypes are also reasonably comfortable to wear, wehging about as much as a pair of sunglasses.

The prototypes that are up for pre-orders are not meant for the general public yet. Google’s calling this version the Google Glass Explorer Edition, and the idea is to get the devices into the hands (and faces) of testers and developers to help kick the tires on the new platform and build new applications.

During today’s Google I/O keynote, Sergei Brin hosted a rather impressive technology demo featuring a series of athletes live-streaming video in a Google+ hangout showing first-person viewpoints from different people skydiving, landing on the rooftop of the Moscone Center, rappelling down the side of the building, and riding bikes into the convention hall.

Here’s a video showing some of the team before today’s live event.

If nothing else, Google just made a pretty good case that these glasses could have some pretty impressive applications in live sporting events. But the idea is that you’d also be able to use them as a hands-free mobile device for taking pictures, searching the internet, and performing many of the actions you use your phone for today, all without pulling your phone from your pocket.

Engadget gathered some additional details about the current Google Glass prototypes. Apparently they’re all WiFi-only for now, include a touch area on the side for some commands, and also accept voice input and can also react to motion thanks to a gyroscope and accelerometer.