This week the first people who don’t work for Google started to pick up their own Google Glass wearable computers. Google is making a limited number of Google Glass Explorer Edition devices available to developers and others who signed up for early access… and who paid $1500 to basically be guinea pigs and beta testers.

So what happens when you give next-gen technology to enthusiasts? They start to pick it apart and see what makes it tick. And it looks like Glass will be pretty hacker-friendly.

Like Google’s Nexus phones and tablets, the Google Glass Explorer Edition has an unlockable bootloader. All you have to do is enable ADB debugging, reboot into the bootloader, and run the same “fastboot oem unlock” command that you’d use to unlock the bootloader on a Nexus device.

Developer Jay Lee also used the ADB access to get a look at the hardware and software behind Glass, and discovered that it’s based on Android 4.0.4 Ice Cream Sandwich and features a TI OMAP 4430 ARM Cortex-A9 processor. Glass also reports that it has 682MB of available RAM, but the actual number may be closer to 1GB.

At this point developers are just starting to write apps for Google Glass and early adopters are getting used to wearing a tiny computer/navigation system/camera above their right eye. But eventually we could start to see custom ROMs and other advanced hacks for Google’s wearable device.

Update: Jay Freeman, the developer behind the Cydia app store for jailbroken iOS devices has rooted/jailbroken his Google Glass device. It looks like we can add another item to the spec sheet: It has 12.5GB of available storage space. 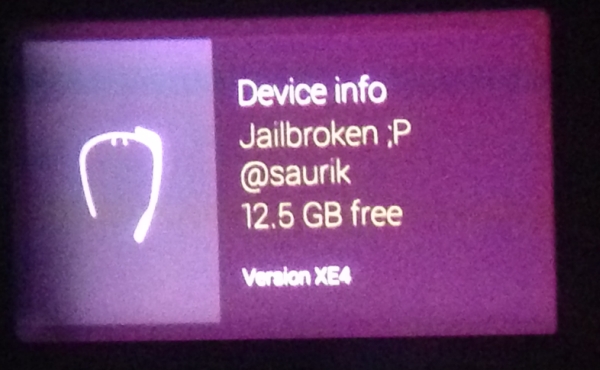 Rooting is different than unlocking the bootloader, since it allows you to access system settings in the stock software instead of replacing the firmware with alternate software.