Launching first on some Walmart Onn tablets later this month, Entertainment Space will be available on other tablets from companies including Lenovo and Sharp later this year. 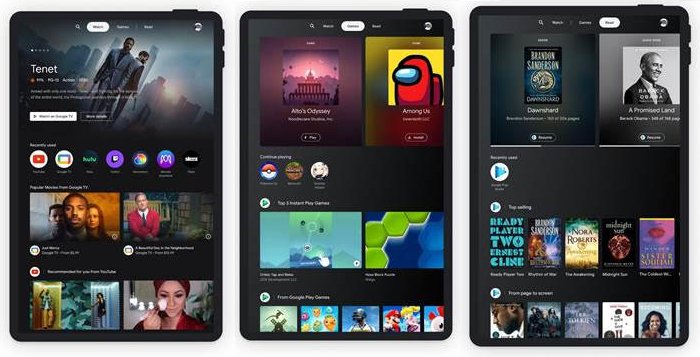 Here’s the idea: instead of firing up different apps to find the content you’re looking for, you’ll just be able to navigate your media and games by selecting Watch, Games, or Read tabs at the top of the screen to view available content in a grid.

The user interface is built into a new home screen/app launcher app from Google, and it reminds me a lot of what Amazon’s been doing with its Amazon Fire tablets for years. They ship with an Android fork called Fire OS that has a custom user interface that puts your free or purchased content front and center by laying it out on a sort of digital book shelf.

One thing that makes Google’s Entertainment Space experience different is that you’re not limited to viewing content from one provider (like Amazon or Google). You can sign into supported apps and view movies, TV shows, and other contents all in one space. Google says in addition to YouTube and Google TV, the Watch tab will show content from Hulu, Twitch, and “many additional services.”

Another thing that’s different is that while the user interface is a bit different from stock Android, under the hood Google’s Entertainment Space is running on Android rather than a fork like Fire OS. And that means you don’t have to jump through any hoops to install the Google Play Store or other third-party apps. It’s pre-installed.

This isn’t the first time google has introduced a custom user interface that can alter the look and feel of Android. Last year the company introduced Kids Space for children’s tablets.