As promised, Google is now selling two of the hottest Android smartphones straight through the Google Play Store. The Google edition versions of the HTC One and Samsung Galaxy S4 come with Google’s version of Android, receive software updates directly from Google, and come as carrier and bootloader unlocked devices.

Update: It looks like software updates won’t be coming straight from Google after all. The company will provide key software to HTC and Samsung, but they’ll be responsible for sending updates to users.

That means there’s also no carrier updatesubsidy, so you have to pay full price for the phones up front. The HTC One sells for $599, while the Samsung Galaxy S4 costs $649. 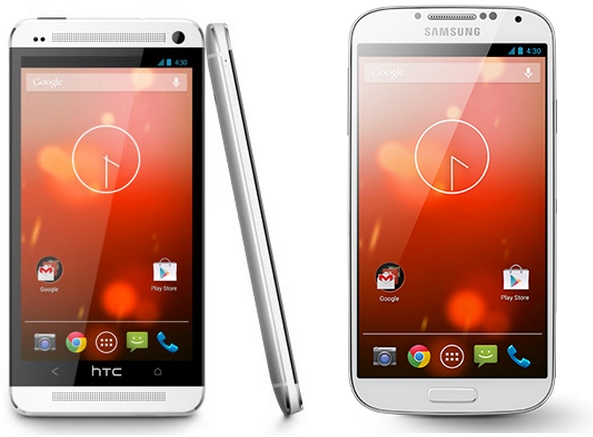 Some wireless carriers charge a lower monthly fee to customers that bring their own devices though, so you might actually end up saving money over the course of a typical 2-year contract by purchasing an unlocked device this way.

Both phones features 1920 x 1080 pixel displays and Qualcomm Snapdragon 600 quad-core processors. Samsung’s model has a removable battery and a microSD card slot, both of which are features the HTC One lacks. But HTC’s phone has excellent front-facing features, and a new type of camera which is designed to work well in low-light conditions.

Since the phones don’t include Samsung’s TouchWiz or HTC’s Sense software, you don’t get all the features that come with the typical versions of these devices. There’s no BlinkFeed widget, no HTC camera, and no Samsung software to let you answer calls by waving your hands over the camera.

On the other hand, you should get software updates much more quickly on these devices than you would on most other phones, and installing custom ROMs should be much simpler.