The spreadsheet feature in the Google Drive app for Android just got about a billion times more useful. Google has released an updated app that features a native spreadsheet editor. It looks better than the web-based editor that preceded it, loads faster, and makes entering and calculating figures much easier on a mobile device. 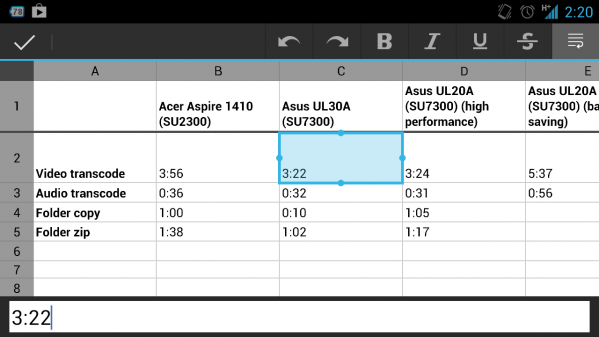 Google Drive is the home of both Google’s online storage service and the company’s online office suite. So if you never use the spreadsheet feature, the update might not be as important.

But there are a few other changes in the latest version of the Android app, including the ability to add shortcuts to files or folders to your Android home screen and the ability to copy links from the “send link” menu item to your clipboard.

Google Drive also now maintains formatting when you copy and paste within Google Docs, and lets you enter the Docs editor with a single tap. The update also lets you edit tables in Docs.

There are plenty of third party office suites available for Android, and many have offered better spreadsheet and documents capabilities than the official Google Drive app for ages. Some can even sync documents with your Drive account. But it’s good to see Google’s official app playing catch-up.