There’s a lot you can do in a web browser these days: you can send email, read news, watch videos, play games, and even make video calls. But a few years ago there were some things that were kind of tough to do in a web browser, so Google introduced support for Chrome Packaged Apps (which were later just called Chrome apps), allowing apps that run in a browser to behave more like native apps… even if they were created using tools like HTML5, JavaScript, and CSS.

But now Google has announced that it’s ending support for Chrome apps, at least on Windows, Mac and Linux. They’ll continue to be supported for Chrome OS for the foreseeable future. 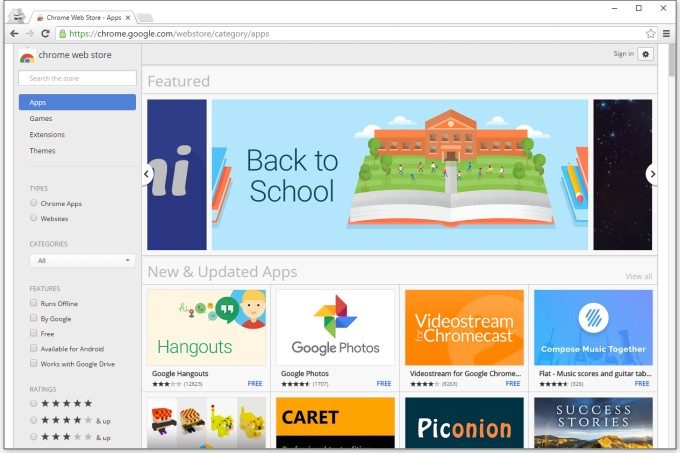 Google’s blog post announcing the change suggests that part of the reason for killing Chrome apps is that they’re increasingly unnecessary: fully web-based apps can now do many of the things that packaged apps were good at, such as sending notifications, connecting to your computer’s webcam or other hardware, or downloading data so you can use the apps even when you’re offline.

Another reason? It seems like most people weren’t really using them anyway: Google says about 1 percent of the people using Chrome on Windows, Mac, or Linux are regularly using Chrome Packaged Apps.

If you’re in that 1 percent, you’ve got about a year and a half to find alternatives to the Chrome apps you’re currently using. Google is going to phase things out slowly:

Google is encouraging developers to convert existing Chrome apps into web apps that can be used across platforms.

While Chrome apps will continue to run on Chromebooks indefinitely, I suspect that has more to do with the fact that it doesn’t make a lot of sense to fire up a web app to play a local video or perform other activities that include local data. But now that Google is bringing Android app support to Chrome OS, I wouldn’t be surprised if the days are also numbered for Chrome Apps on Chrome OS.