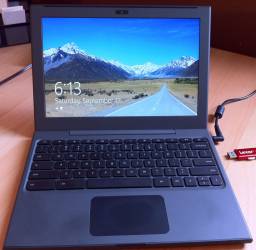 The Google Cr-48 is the first notebook that was designed to run Google’s Chrome operating system. It never actually went on sale in the US, but Google distributed thousands of the laptops starting late last year as part of a pilot project before Samsung and Acer brought commercial Chromebooks to market in 2011.

While the Cr-48 was designed to runs Google’s browser-based operating system, its hardware is pretty similar to what you’d find in many other Windows or Linux personal computers and we’ve seen people install Ubuntu Linux, Windows 7, and OS X on the machine.

But what about Windows 8? Yeah, the Cr-48 can handle that too. It turns out Microsoft’s latest operating system boots in just 12 seconds on the Chromebook. That’s not surprising, as it boots pretty quickly on most computers, and the Cr-48 has a relatively zippy little solid state disk.

The computer also has a 12.1 inch display and a 1.66 GHz Intel Atom N455 single core processor, making the Cr-48 an oversized netboook once you replace the Chrome OS software with something a little different such as Windows.

The folks at Cr-48 Wikispaces have detailed instructions, but in a nutshell you need to open up the computer, place a bit of tape over a contact point, and then flash a new BIOS. Once you’ve done that you can install Windows 8 the same way you would on any other computer. The simplest method is probably to use the Windows 7 USB/DVD tool.

I suspect it’s also possible to install Windows 8 on an Acer AC700 or Samsung Series 5 Chromebook using similar techniques. That probably falls into the because-I-can category of stupid computer tricks though. There are plenty of laptops and netbooks designed to run Windows. If you spent money on a Chromebook, odds are you actually wanted a computer designed to run Google’s browser-based operating system with its emphasis on web-based applications.