Google’s upcoming Pixel 4 smartphone will be the first commercially available device to use the company’s Soli motion-sensing radar technology.

That means you’ll be able to interact with the phone without touching it by doing things like waving your hands to skip songs, snooze an alarm, or silence an incoming phone call.

Soli will also come into play when using the Pixel 4’s face unlock feature, since the phone will automatically detect the motion as you move the phone toward your face and turn on the sensors just when you need them, allowing you to unlock the phone “in one motion” just by bringing it toward your face. 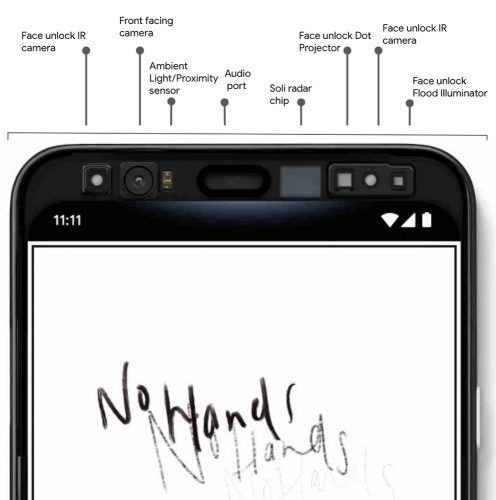 While the Pixel 4 likely won’t launch until this fall, Google has broken with tradition by spilling some beans a bit early this year. After images of the upcoming smartphone began to leak, Google released its own pictures giving us our first look at the back of the device. And today’s announcement that the phone will use Soli radar technology follows recent reports hinting that this might be the case.

It also follows news that the release of the mid-range Pixel 3a led to Google selling twice as many Pixel phones in Q2, 2019 as the company did a year earlier — so I wouldn’t be surprised if Google is also preemptively trying to make a case for why you might want to spend twice as much on the upcoming Pixel 4 as you would on a $400 Pixel 3a.

At a time when smartphone bezels are getting slimmer and slimmer, Google is also making a case for why the Pixel 4 needs one — there’s a lot of technology crammed into the small border on top of the screen, including:

One thing we haven’t seen on any leaks so far? A fingerprint reader. Every Pixel smartphone released to date has had one on the back of the device.

The omission had led some to wonder whether Google would adopt an in-display fingerprint sensor. But it’s also possible the company could be taking a page out of Apple’s playbook and going face-only for biometric security.

Google says in addition to unlocking a Pixel 4 by looking at it, you’ll be able to use face unlock for secure payments and app logins. Your personal data will be stored and processed on your device, so it will never be sent to Google’s servers.

I suppose it’s possible there’s also a fingerprint sensor hidden in the screen. But we may have to wait until this fall to find out for sure… or at least until Google’s next teaser.

Update: Google has also confirmed to The Verge that this is the reason employees have been paying $5 to people in select cities across the United States who agree to have their faces scanned. It’s to collect data and improve the experience of its Soli-enabled facial recognition system.

Several websites had recently reported about the face-scanning-in-public situation, but at the time it was unclear what Google planned to do with those scans.