Just a few days after Google released a $35 device for streaming internet video to your TV, hackers have figured out how to run unsigned code on the Google Chromecast. The folks at GTV Hacker have released an exploit package that lets you access a root shell on a Chromecast device.

Right now there’s not much that casual users can do with root access. But this is the first step toward developers creating custom apps, mods, or even custom ROMs for Chromecast. 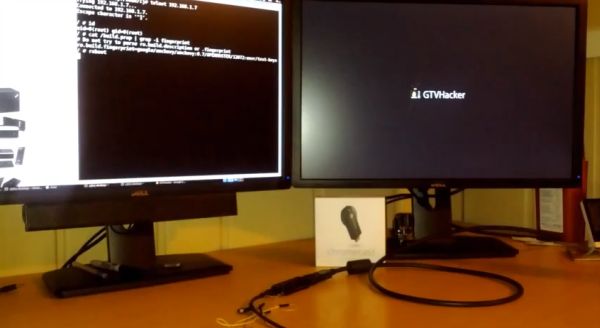 The Chromecast features a single core Marvell processor, 512MB of RAM and 4GB of storage. It’s designed to let you pick videos, music, or other content on your phone, tablet, or computer and send it to your television screen.

In other words, it’s basically a very, very stripped down version of Android. The bootloader, binaries, and many other bits look like Android. On the other hand, there’s no Dalvik virtual machine, which means that there’s currently on way to install and run existing Android apps.

Again, there’s not much reason for casual users to exploit a Chromecast at this point. In fact, the initial GTV Hacker exploit could easily be patched by a software update from Google. But the door now appears to be open for independent development for the platform.

Folks at the XBMC forum are already discussing ways to get the popular open source media center software to play well with Chromecast. It’s not clear if the $35 device really has the hardware to run a full XBMC installation reliably, but there’s a chance that the Google Cast protocol could be added to XBMC eventually. That would allow you to pull up a video using XBMC on your PC, tablet, or other device and then send it to a TV with a Chromecast plugged in.