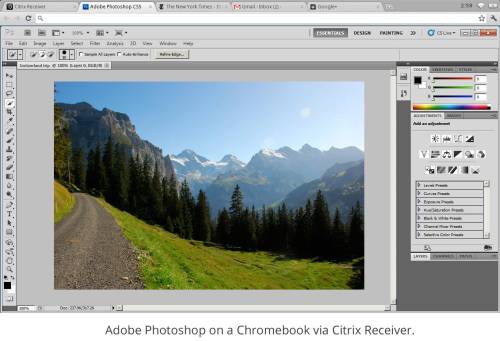 One of the key features setting Chromebooks apart from normal laptop computers is that they’re designed to boot quickly and resume from sleep even more quickly. Because the Chrome OS laptops have solid state drives and the operating system is designed to do little more than run a web browser, it doesn’t take long to go from opening the lid to surfing the web.

In my Samsung Series 5 Chromebook review I found that the machine typically booted in about 10 seconds and took virtually no time at all to resume from sleep.

The update also adds the ability to “print” documents or web pages to Google Docs, and as we previously reported, support for Netflix video streaming.

There’s also a new app available in the Chrome Web store which allows you to login to a virtual desktop to run PC software in a browser window. It’s called Citrix Receiver Tech Preview and it’s aimed at business, education, or government institutions rather than individual users. This isn’t the first such solution we’ve seen. The City of Orlando has already committed to deploying Chromebooks using VMware View software in a similar fashion.