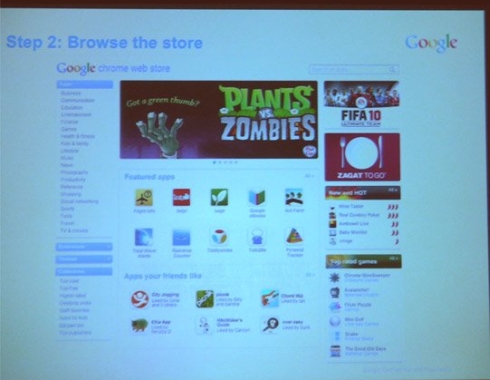 OK, so Google might launch a tablet this fall running its browser-centric Chrome Operating System. OK, so Chrome OS is designed to run web apps instead of native apps stored on a hard drive. But what kind of apps are going to be available?

Video gaming site 1Up snapped some photos at a Google presentation to game developers yesterday. Google was showing off the new Chrome Web Store, which allows users to “install” web apps on Chrome OS.

Basically, the Chrome Web Store looks a lot like Apple’s App Store or Google’s Android Market, with apps sorted by category and the ability to see details, screengrabs, and user reviews for apps.

The apps will all run in the browser, and apps will be written in Flash, HTML5, JavaScript, and/or C++. But when you “install” an app, a shortcut will appear in your New Tab page. Uses can also grant permissions for apps.

Does that mean that Chrome OS devices won’t have hard drives or solid state disks? Not necessarily. In addition to the space you’ll need to store the operating system, I suspect Chrome OS will be able to cache some data allowing online content (like Flash video or Flash games) to run more smoothly — or even for some content to run when you’re offline. But Google is definitely continuing to show that its head is in the clouds.

You can find more photos and details at 1Up.com.