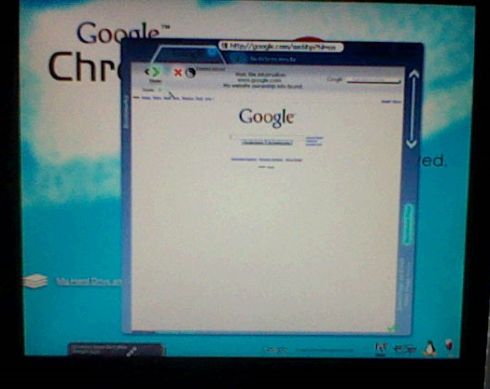 While Acer and a handful of other companies are moving forward with plans to launch netbooks running the Google Android operating system first designed for cellphones, Google is expected to introduce a new OS developed specifically for netbooks and cloud computing later this year. The company hasn’t released any official images of the Chrome Operating System yet, but a tipster sent a group of images to my colleagues at Download Squad.

Now, I’d take these images with a bucket full of salt. But they seem more plausible than the first round of photos that leaked a few weeks back, and which were confirmed to be a hoax.

The new image are at least a bit more artful than the first batch. They show an operating system that’s clearly designed as little more than a launching pad for a web browser. And since Google has already stated that most Chrome apps will essentially be web apps, and development for the platform will basically entail writing web pages, that seems plausible.

But there’s still at least a 75% chance these images are fake. Just because.