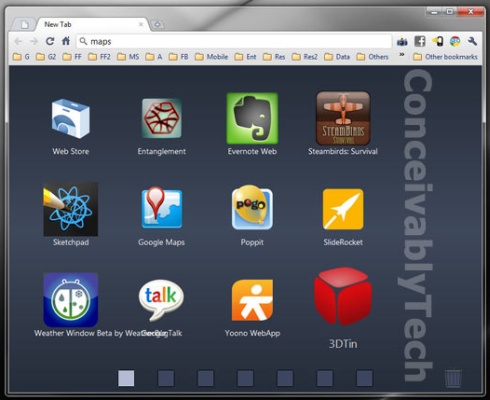 Google has repeatedly stated that the company’s Chrome Operating System will initially target laptop computers with versions for tablets and other devices coming later. But last week the developers working on Chrome added an alternate new tab page designed for touchscreen devices.

Google Chrome OS is basically an operating system based on the Google Chrome web browser, and like the browser, Chrome OS is designed to run web apps instead of native desktop apps. There’s an app store where you can “install” web apps by creating shortcuts which will show up every time you open a new browser tab.

The touch UI for the new tab page supports touchscreen gestures such as swiping to flip between multiple page. You can also long-press on an icon to move it and rearrange the list of apps.

The first Chrome OS devices expected to hit the streets this summer will be notebooks. But it looks like Google Engineers are working on “TOUCH_UI” builds of the operating system as well, which means it might not be too long before you have to decide whether you want a tablet running Google’s Chrome OS or Android operating system.