If you’re the sort of person who regularly runs a bunch of programs on your computer at once, you may already be a fan of using multiple monitors. You can put one set of apps on one screen and a different set on another and tilt your head a bit to switch your focus from one to the other.

But if you have a laptop, you’re probably confined to using a single screen from time to time (unless you have a portable monitor that you take everywhere you go).

Enter virtual desktops. Most modern operating systems offer a way to create multiple virtual workspaces that you can flip between. It’s not quite as seamless as using multiple displays, but it’s certainly more compact (and more energy efficient, for that matter).

Windows, Mac, and many GNU/Linux distributions support virtual desktops. But you know what doesn’t? Chrome OS. That could change soon though. 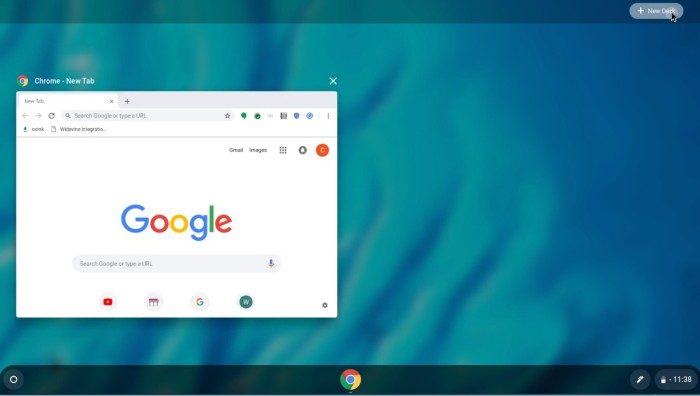 A Chromium code commit from Google software engineer Ahmed Fakhry shows that the company is working on adding support for “virtual desks.”

So far only the “initial scaffolding” is available. There’s a “New desk” button that doesn’t actually do anything yet, and a bar that will eventually show thumbnails for different desks… but which currently shows nothing.

Fortunately we have a pretty good idea of what the user interface will look like, because Fakhry included a demo video:

Personally I’m a big fan of using multiple physical displays when I can… but I’ve never quite gotten the hang of switching between virtual desktops. Some folks, however, are super excited that this feature is coming to Chrome OS.

2 replies on “Google Chrome is getting virtual desktops (probably)”