Google is bringing the ability to mirror the screen on your Android phone or table to a TV using a Chromecast. 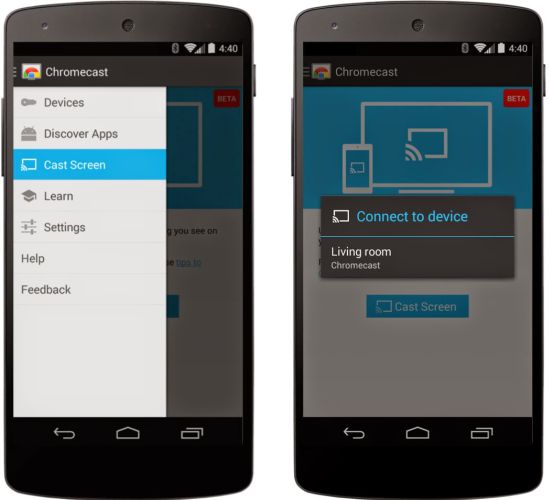 Screen mirroring is in beta at the moment, only officially supports a group of recent of Android devices from Samsung, HTC, and LG at launch (including the Nexus 4 and later) and requires version 1.7 of the Chromecast app for Android.

While folks have been finding a Cast Screen option in the Android Quick Settings panel for a while, if you don’t see the option in your pull-down panel, you can also fire up the Chromecast app and choose the “Cast Screen” button from within the app.

Once you’ve done that, just choose the Chromecast on your network and everything displayed on your phone or tablet should show up on your TV.

When you want to stop casting, just pull down your notification drawer and choose the Disconnect option. You can also open up the Chromecast app again, choose the “Cast Screen” option again, and then choose disconnect — but it’s easier to do it from the notification area.

Update: Want to try Chromecast screen mirroring on a device that didn’t make that list? If it’s a recent phone or tablet and it’s rooted, there’s a good chance you can install a third-party app to enable mirroring support.