We’ve known it was coming for a while, but now Google has officially confirmed it’s bringing support for the Steam game client to Chromebooks. In a blink and you’ll miss it moment during the company’s Game Developer Summit keynote, Google announced that it will soon launch an alpha of Steam for Chrome OS, available on “select Chromebooks.”

It’s just one of several announcements the company made related to gaming on Chromebooks. 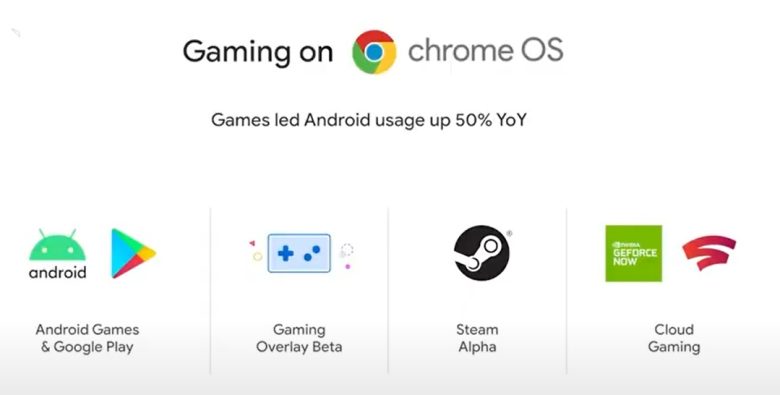 Google hasn’t publicly spelled out many details about the new Steam Alpha for Chromebooks yet. It’s not even clear how uses can sign up to join the alpha test and install Steam.

But according to Chrome OS code uncovered recently by the folks at 9to5Google, you’ll need a fairly powerful, fairly recent Chromebook with an 11th-gen Intel Core i5 or better processor and at least 7GB of RAM. That excludes most entry-level Chromebooks… which makes sense, as gaming tends to be a resource-intensive task on any computer.

On a Chromebook, it will most likely take advantage of the fact that Steam offers a Linux version of its game client (and tools that let many games that would otherwise be Windows-only run on Linux as well), and that Chrome OS has an optional feature that allows you to run some native Linux applications.

But if you have a Chromebook that doesn’t meet the minimum specs, there may be other ways to play games. Google notes that Android usage on Chromebooks is up 50% year-over-year, and that’s driven largely be people installing optional Android support in order to run mobile games on Chromebooks.

Later this year Google also plans to launch a public beta of a new overlay that will work with some Android games, allowing users to create their own custom keyboard & mouse control schemes without any need for developers to specifically optimize their Android games for Chromebooks.

And, of course, there’s game streaming. Google notes that between services like NVIDIA’s GeForce Now and Google’s Stadia, you can stream over 1,400 PC games to a Chromebook over the internet.