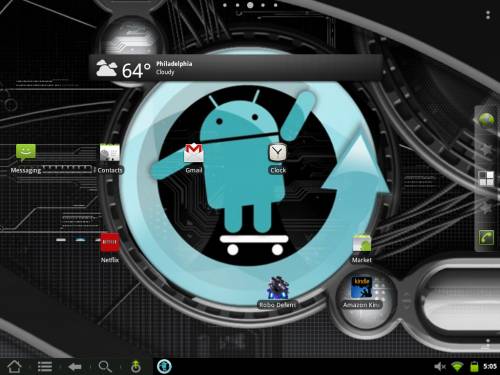 Update: You can also now install Android 4.0 on the TouchPad, thanks to CyanogenMod 9 Alpha 0.

The HP TouchPad is a tablet-style device with a 9.7 inch, 1024 x 768 pixel touchscreen display, a 1.2 GHz Qualcomm Snapdragon dual core processor and 1GB of RAM and 16GB to 32GB of storage. For the most part, it’s a lot like other tablets from other companies including Apple, Lenovo, and Samsung. But there are a few key things that set the HP TouchPad apart from the crowd.

First, it’s been discontinued. HP canceled the tablet after just 45 days on the market, and sold off all the remaining inventory for prices ranging from $99 to $149. Suddenly the tablet, which hadn’t been selling well up until then, became very popular with bargain hunters.

Second, the HP TouchPad shipped with webOS 3.0 software rather than iOS or Android. Given the TouchPad’s new status as a dead tablet walking, it’s not clear how much future support for webOS we can expect. And the HP App Catalog for third party webOS apps looks a bit like a ghost town when compared to Apple’s App Store or the Google Android Market.

So a group of independent developers have been working for the past few months to port Android to run on the tablet, allowing it to run additional software. After a lot of hard work, the first alpha build of CyanogenMod 7.1 Android is now available for anyone to download and install on the TouchPad. This creates a dual-boot tablet that can run both Android and webOS, and switch between one and the other.

We’ve already posted step-by-step instructions for installing Android on the TouchPad. But if you want to know how it works on the tablet before getting your hands dirty, here’s a brief overview.

In a nutshell, CyanogenMod feels great on the TouchPad. The device actually feels faster and more responsive running Android than it does webOS. With webOS, there’s a phenomenon where the tablet unexpectedly freezes for a few seconds from time to time. That’s not a problem with Android.

If you make sure to install the gApps package for Android, you can also download thousands of apps from the Android Market and use the official Gmail, YouTube, and other Google apps. Some apps may not appear in the Market unless you install a patch which prevents the Market from filtering out apps.

Or if you happen to have the APK installer packages for those files you can load them on the tablet manually. I extracted all three apps from my Google Nexus One smartphone, emailed them to myself, and installed them on the TouchPad with no problem. Bear in mind, these apps are designed for phones with small screens and don’t look great on the TouchPad’s 9.7 inch display. But they do work.

Since the TouchPad doesn’t have the Home, Back, and Menu buttons you’ll find on most devices running Android 2.3 Gingerbread or lower, the CyanogenMod team has tweaked Android to include on-screen buttons that show up at the bottom of the display. This is also where you’ll find notifications. You can swipe up from the bottom to view notification details.

While there are still some bugs to work out, most of the important features are now working. The TouchPad supports automatic screen rotation, WiFi, Bluetooth, audio, and video playback. You can even install and run the official Netflix app for Android. The camera isn’t fully functional yet, and rebooting from webOS to Android is a bit of a pain. But future updates may address some of the remaining issues.

The Skype application works great… for text chat. It doesn’t recognize the camera, so there’s no option for making video calls. And while I was able to place a voice call to a friend and hear him speak clearly, I sounded like a chipmunk to him. There may be some sort of audio sample rate problem.

Sometimes when resuming from standby, I’ve noticed that the TouchPad doesn’t automatically connect to my wireless network. But disabling and re-enabling WiFi seems to fix this problem.

The camera app doesn’t take pictures, the battery runs down more quickly than it should, and there CyanogenMod team is still working on improving WiFi, Bluetooth, and other features.

CyanogenMod is built on open source software — which is why the TouchPad software is based on Android 2.3 Gingerbread instead of Android 3.2 Honeycomb. Google has never released the source code for the tablet-friendly Honeycomb operating system. Google is expected to release the source code for Ice Cream Sandwich once that version of Android is available.

ICS will be optimized to run on both phones and tablets, and although it will probably take a few months, CyanogenMod developers hope to integrate ICS code in future versions of their custom ROMs for the HP TouchPad and other phones and tablets.

5 replies on “Google Android on the HP TouchPad – video”