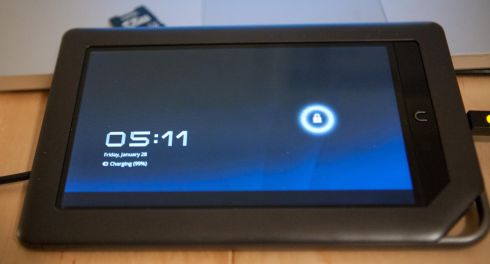 The good news is that the first version of Google Android 3.0 Honeycomb has been ported to an existing Android tablet. Xda-developers forum member deeper-blue combined data from the preview SDK Google released this week with a kernel for the NOOKcolor eBook reader to get the software up and running on the tablet.

The bad news is that the port is mostly a proof of concept at this point. There’s no hardware acceleration yet, and while deeper-blue did manage to get touch input to start working, he says the tablet is very slow while running Android 3.0. Hardware graphics acceleration might improve things, and he hopes to work on that this weekend.

Google hasn’t actually released the source code for Honeycomb yet, which means that while it’s possible to grab the emulator image from the SDK and do interesting things with it, the best we can really hope for at this point is buggy and slow software that can run on existing devices. Once the source code is made available, we’ll probably see fully functional ports of Honeycomb to tablets such as the NOOKcolor, Samsung Galaxy Tab, and Notion Ink Adam tablet. While the manfucturers may eventually offer their own updates, there’s an active hacker/independent developer community that will likely beat them to the punch.

3 replies on “Google Android Honeycomb ported to the NOOKcolor: Doesn’t really work yet”