Google’s annual developer conference came and went this month without the launch of a new version of the Android operating system. But web publishers (including this one) have noticed a growing number of visits from folks using mobile devices identified as running Android 4.3 in recent weeks… and now a member of the xda-developers forum has published a few pictures of a phone that appears to be running the next version of Google’s mobile OS.

A Google Nexus 4 with Android 4.3 Jelly Bean and the build number JWR45B was spotted at the Thailand Mobile Expo. 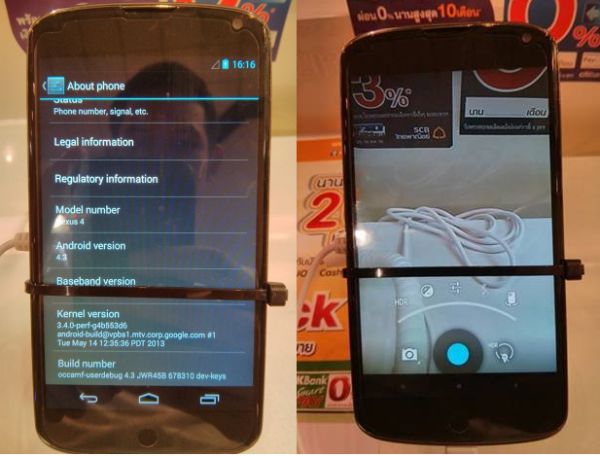 At this point there’s not much to report in the way of new features. But the phone does appear to have a new version of the camera app, bringing the menu buttons a little closer to the shutter button, which should make it a little easier to adjust camera settings on your phone or tablet.

While Google hasn’t officially launched the update yet, the company did recently roll out a major update to Google Play Services, as well as Google Play Games for synchronizing your data across devices and making gaming more social. Google also launched new versions of a number of core apps including Google Drive, Google Play Music, Google Play Books, Google Play Movies, and more. A Gmail app update is possibly on the way as well.

In other words, some of the biggest updates to the Android platform this year are being distributed without a major update to the operating system itself. And that’s a smart way to deal with the “fragmentation” problem that’s affected Android for the past few years.

Since Samsung, HTC, LG, Motorola, and other device makers push out OS updates to phones and tablets, it can sometimes take months or years before a new version of Android makes it to those devices… if it ever does. By pushing updates to individual apps and services instead, Google can offer many improvements without updating your device’s firmware at all.

Still, a lot of folks are looking forward to the next version of Android, and it looks like Android 4.3 might be coming soon.