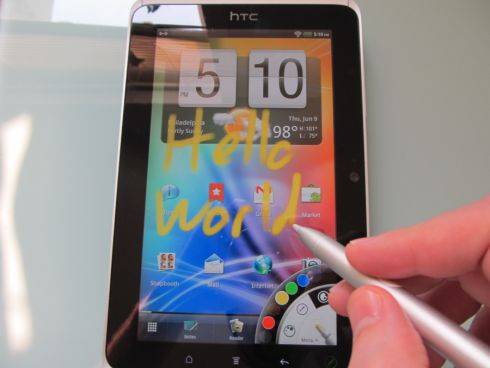 Over the past few months we’ve seen a couple of companies try to distinguish their Android tablets from the crowd by offering a stylus for writing and drawing. The HTC Flyer, Lenovo ThinkPad Tablet, and upcoming Asus Eee Pad MeMo (if it ever actually comes to market) all feature a stylus. But the manufacturers have also had to bundle some extra software with their tablets — because up until now Android hasn’t really supported a stylus or digital pen.

Like iOS, Windows Phone 7, webOS, and other modern mobile operating systems, Android has really been a finger-friendly operating system. The icons, status bars, and other graphic elements are nice and big and designed to be tapped with a finger or thumb. Android typically runs best on devices with capacitive touchscreens which react to the electrical impulses in a finger.

If you try to use a stylus with most Android phones or tablets, nothing will happen at all, because the device just won’t recognize the input.

But that could change when Android 4.0 Ice Cream Sandwich hits the streets. Google has built support for stylus input directly into the operating system. That means that as long as manufacturers use touchscreens that can recognize a stylus, you’ll be able to use one to perform a variety of actions.

Android still won’t have built-in handwriting recognition or some of the other stylus-friendly features that were present in PalmOS and Windows Mobile a decade ago. But Android will have the ability to recgonize pressure-sensitive input from a stylus which will make it easier for developers to write drawing or writing apps that take advantage of the new feature.

It sounds like you may also be able to navigate through Android menus using a stylus instead of a finger on some devices.

Google appears to be getting serious about support for peripherals in Android. The company also added support for USB peripherals such as a keyboard, mouse, game controller, or USB flash drive earlier this year.