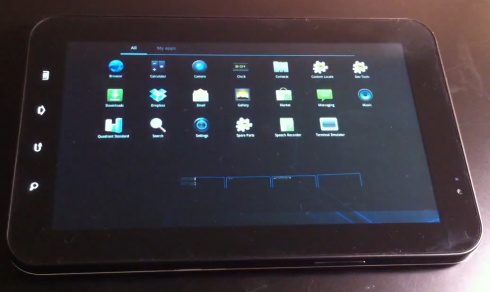 While Samsung’s upcoming 8.9 inch and 10 inch tablets will both run Google Android 3.0 Honeycomb, the company has yet to announced any plans to upgrade the original 7 inch Galaxy Tab from Android 2.2 to Honeycomb. But xda-developers forum member spacemoose1 has stepped up to the challenge with an unofficial build of Android 3.0 for the Samsung Galaxy Tab.

The software is confirmed to work on the Verizon and Sprint versions of the 7 inch Android tablet. It may work on other models, but there are no guarantees. In fact, there are no guarantees anyway. The software is described as an experimental build for experienced Android hackers. There’s also currently no support for 3G, WiFi, GPS, the accelerometer, or even SD card access.

That said, if you want to see what the basic Android 3.0 experience looks like on a Samsung Galaxy Tab, check out the video after the break which shows the lock screen, program launcher and overall user interface. Some of the animations look a little jerky, but it’s great seeing the first version of Android designed for tablets running on one of the best Android tablets released last year.