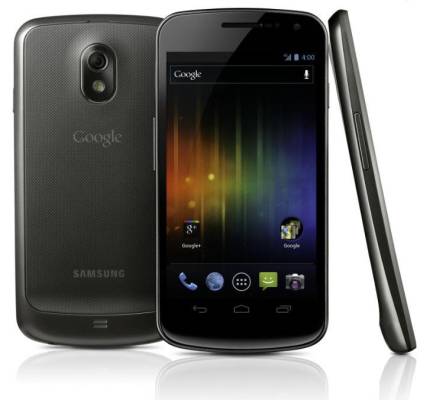 Google is introducing Ice Cream Sandwich — the latest version of the company’s Android operating system. Android 4.0 Ice Cream Sandiwch will be available with new smartphones and tablets soon, and we’ll probably see software updates for at least some existing devices soon. But one of the first products expected to ship with Ice Cream Sandwich is the Samsung Galaxy Nexus.

This new smartphone from Samsung will be the official Google developer phone for the latest operating system. Like the Samsung Nexus S and HTC Nexus One before it, the phone will also sport some of the best specifications of any current Android phone.

The Samsung Galaxy Nexus will have a 4.65 inch, 1280 x 720 pixel Super AMOLED display and a 1.2 GHz TI OMAP 4460 dual core processor. The Galaxy Nexus screen bezel is just 4.29mm, which allows Samsung to squeeze a large display into the case without making the phone much larger than existing Samsung Galaxy smartphones.

The phone will run Android 4.0 without any Samsung TouchWiz customizations. It comes with a few new features including the ability to shoot panoramic photos with the camera and a facial recognition utility that will allow you to unlock the phone by gazing deeply at the camera.

On paper the phone looks like a pretty nice alternative to Apple’s current flagship phone, the iPhone 4S. Samsung’s new phone has a higher resolution display and uses Google’s newest software to combat Apple’s latest. But Nexus devices never seem to be as popular as iPhones… or even as popular as some other high profile Android phones.

Still, it’s always nice to check in once per year and see what Google things an Android phone should look like.

The Samsung Galaxy Nexus will be available in the US, Europe, and Asia starting in November.