Strap a virtual reality headset to your face and you can be transported to faraway or fantastical places, play interactive games, or explore 360-degree videos. But the realism is a bit tempered by today’s display technology: your field of view is more limited in VR than in the real world, and sometimes it can feel like you’re looking at the “virtual” world through a screen door, since you can actually see the lines between pixels.

But display makers have been working on pixel-dense displays that will alleviate some of those issues, and Google and LG have unveiled a new system that comes the closest yet to approximating what you see in the real world.

It’s still not quite there yet though. 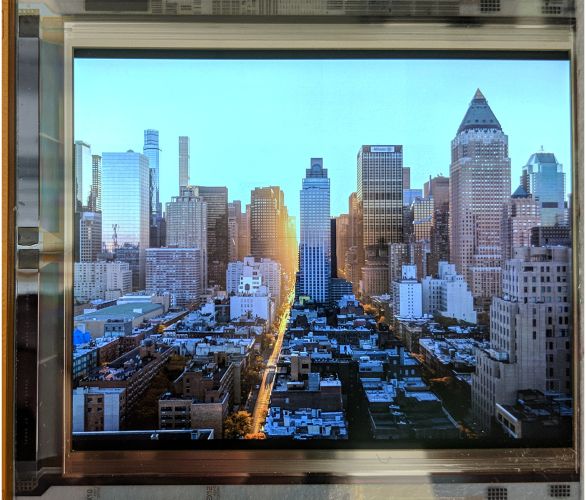 As promised earlier this year, Google and LG have released details about a new 4.3 inch OLED display with 1,443 pixels per inch and a 120 Hz refresh rate.

One of the most interesting things in the team’s research paper is the estimation that in order for a VR display to really mimic what a typical person would see in the real world, you’d need a field of view of about 160 degrees horizontally by 150 degrees vertically per eye, as well as display with 2,183 pixels per inch (or a resolution of about 9,600 x 9,000 per eye).

The HTC Vive Pro, for example, shows 615 pixels per inch (1440 x 1600 pixels per eye), and that’s one of the higher-resolution VR headsets on the market today.

Of course, it would take a lot of processing power to render that many pixels smoothly all the time, but the research paper also mentions that eye tracking technology could be used for foveated rendering, which would basically allow a device to focus most heavily just on the pixels you’re looking at rather than the ones at the periphery of your vision. Even without eye-tracking, some pixels would be rendered in higher acuity than others.

Anyway, while this new display technology sounds like it could offer one of the best VR experiences yet, Google and LG aren’t the only ones working on this sort of solution.