A month after announcing a partnership to develop smartphone-based contact-tracing technology, Google and Apple have announced that their new Exposure Notifications APIs are available for developers of public health apps.

In other words, you may soon be able to download an app that will alert you if you’ve come in contact with someone who came down with COVID-19. But the companies note that the feature will be opt-in and it will require you to install an app… which helps limit privacy concerns (see more on that below), but which also limits the effectiveness of this technology. 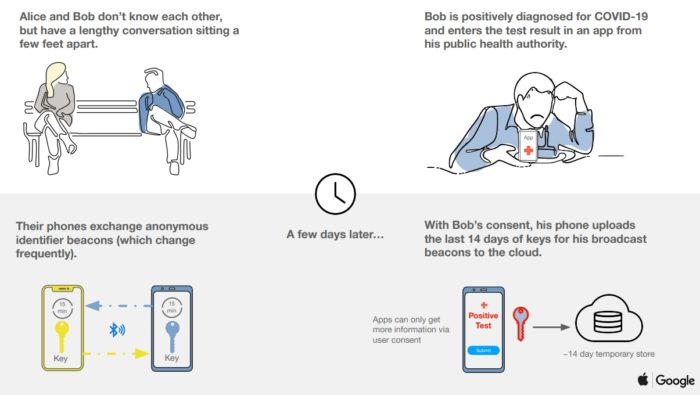 According to Apple and Google, the API is available for public health app developers in a handful of states in the US and in 22 countries across five continents.

The companies say they built the system with privacy in mind — the idea is that your phones can share data via Bluetooth with those of people nearby in an anonymous way. So if you later come down with COVID-19 and enter that data into an app, other people who spent time near you will receive an alert — but this all happens anonymously. Your name, location data, and other information that could be used to identify you is never shared with Apple, Google, app developers, or public health agencies.

Some health officials have criticized Apple and Google’s privacy-first approach, saying that that by not sharing more data with public health agencies, it’s of limited use. But the companies figured that building privacy protection into the system would lead increase people’s willingness to actually use it.

If enough people installed the app, this would allow users who come down with COVID-19 to notify other people they’ve come in contact with that they may want to get tested or self-quarantine in order to protect their own health and help slow the spread of the disease.

But since the app is opt-in, I suspect that only a small fraction of Android and iOS users are likely to install the app, which means it may have a limited impact on the spread of COVID-19.

If the user base is small, the number of people self-reporting their cases will likely be small as well, as will the number of people who receive notifications… but that doesn’t necessarily mean you haven’t been exposed to the coronavirus. It just means that if you’ve been in contact with anyone who later came down with COVID-19, they didn’t report it in one of the apps using the new Exposure Notifications API.

Meanwhile, many governments are also ramping up hiring of human contact tracers who can try to track down people who may have been exposed to someone who has contracted COVID-19… no app required.