While Chromebooks have come into their own in the past year as inexpensive portable notebooks with speedy performance, you can do almost anything you can do on a Chromebook on a Windows, Mac, or Linux computer simply by installing the Chrome web browser.

Now Google is making that more true than ever, by releasing an app launcher for Chrome for Windows. 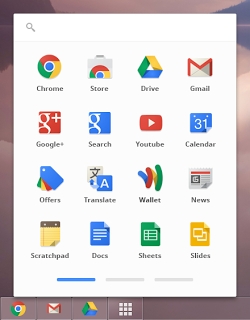 The app launcher works the same way on Windows that it does on Chrome OS: Instead of simply launching the Chrome web browser and visiting the new tab page to see a list of available apps, websites, and a search bar, you can now see everything in a pop-up menu when you tap an icon in your Windows toolbar.

In order to use the app launcher on Windows you’ll need to enable the Google Chrome Dev Channel and then install a Chrome packaged app so that the launcher has something to… launch. A Chrome packaged app is basically a web app that launches outside of the web browser even though it’s written using web tools such as HTML and JavaScript.

If you don’t want to go through all that, there’s another way to get a Chrome web app launcher on your Windows desktop. Since late last year, you’ve been able to create a custom shortcut for Chrome that brings up a launcher by adding “-show-app-list” to the target.

Unfortunately adding a Chrome app launcher won’t make your computer boot any faster or give you 100GB of free Google Drive space — two of the benefits you get when you buy an actual Chromebook.