Adobe announced last year that it was winding down support for Flash on mobile devices. Now the end is in sight.

The company won’t be offering a certified version of Flash Player for Google’s new Android 4.1 Jelly Bean operating system. And while you can still download and install Flash Player for Android from the Google Play Store for a little while, Adobe will pull the app from the store on August 15th, 2012. 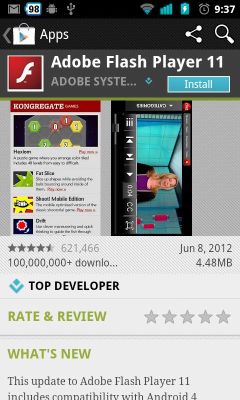 Actually, things are a little more complicated than that. The app will still be available from the Play Store — but only to provide updates for users that already have Flash installed. New users won’t be able to install Flash from the Google Play Store.

If you want to continue using Flash, Adobe recommends using a certified phone or tablet that comes with Flash preloaded or to download it from the Play Store before August 15th… and to continue running Android 4.0 or earlier.

This doesn’t mean that devices running Android 4.1 can’t support Flash. But Adobe isn’t putting any time or effort into ensuring compatibility, so don’t expect everything to work properly.

In fact, Adobe officially recommends uninstalling Flash if you update your device from Android 4.0 to Android 4.1.

To be honest, this probably won’ t be that big a deal for most users.

A few years ago, one of the key points differentiating Google Android from Apple iOS was that Android supported Flash. But it never did it very well.

For the most part, installing Flash on an Android phone allows you to see more ads on web pages that take longer to load, and to play a few games and videos optimized for mobile devices.

Over the past few years, most major online video sites have changed the way they stream content so that you can watch videos on mobile devices that don’t have Flash player installed. And many websites that do still have Flash-only content including many casual gaming sites, don’t work well with mobile devices anyway since many Flash games are designed to be played with a keyboard and mouse, not a touchscreen and fingertip.