The GNOME desktop environment is one of the most popular user interfaces and suites of apps available for desktop Linux distributions. Now a team of developers have been working to bring GNOME to mobile devices running Linux-based operating systems.

GNOME Shell for mobile provides a touch-friendly user interface optimized for smartphones and tablets. And while it looks a bit like Android or iOS at first glance, there are a few key differences. The GNOME team have outlined some of them in an article about recent updates to GNOME Shell on mobile.

Like other modern mobile user interfaces, you interact with GNOME shell using taps, swipes, and other gesture-based navigation.

What’s different is that Android has three different views for navigation: a home screen, app drawer, and multitasking view. iOS has two: home screen and multitasking. But GNOME Shell has a single screen that allows you to view and launch apps and switch between running apps using gestures. There’s no need to wait for a new screen to load.

In a nutshell, you can swipe up from the bottom of the any screen to view a list of installed apps, thumbnail images showing all currently running apps, and a search box. You can tap an app icon to launch a new app, enter a term in the search box to find an app, or swipe between running apps to switch which app runs in the foreground.

Typing in the search box will bring up relevant results including apps and settings. 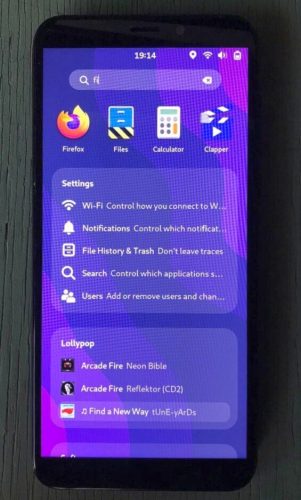 Other recent updates to GNOME Shell for mobile include an improved keyboard optimized for narrow screens with support for gesture-based typing. The keyboard also does a better job of figuring out when to show up and when it should stay hidden, depending on what activities you’re using the phone for. And the Quick Settings view has been updated to include notifications in the same menu.

GNOME Shell is still very much a work in progress. Some of the features that aren’t available yet, but which are on the roadmap include support for emergency calls, haptic feedback, PIN unlock and phone calls from the lock screen.

You can find more details, as well as some additional brief demo videos, at the GNOME blog. Developers of postmarketOS are also working to add support for GNOME Shell to their mobile Linux distribution, so you may soon be able to install builds of the operating system on supported phones or other mobile devices with GNOME Shell pre-installed, or install it yourself from a repository.

GNOME Shell for mobile, by the way, isn’t the only GNOME-based user interface for mobile devices. Purism’s Phosh UI is also built on top of GNOME. It’s the default user interface for the company’s PureOS software that ships on the Librem 5 smartphone, and it’s been under development for years. Phosh is also available for other mobile Linux distributions.