The GMK NucBox is a tiny desktop PC that that measures 2.4″ x 2.4″ x 1.7″ and weighs about 5 ounces. It’s a full-fledged computer that ships with Windows 10, and which can run other desktop operating systems including Ubuntu Linux.

But what if you just want to use it as a media center?

That’s where a lightweight Linux distribution like LibreELEC can come in handy. 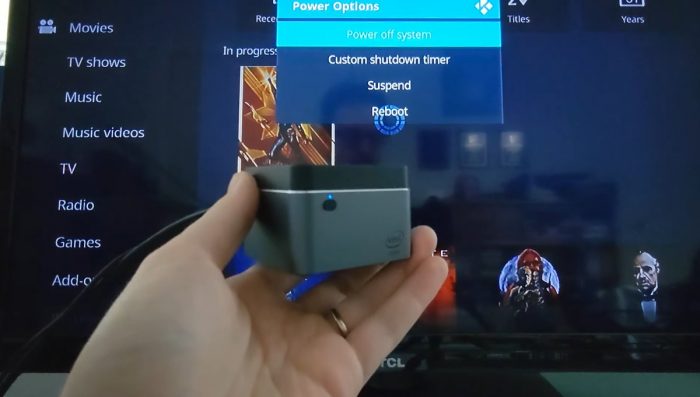 Designed to let you boot straight into the Kodi media center application, this operating system can be installed to a computer’s built-in storage, or to a USB flash drive. I chose the latter option, since this allowed me to use LibreELEC without wiping the SSD that Windows and Ubuntu are installed on.

The operating system boots quickly. Setup was as simple as connecting to my wireless network and adding a few media sources. And once everything was up and running, I had no difficulty playing 4K videos with high bit rates.

For my test, I downloaded some of the highest quality videos from the jell.yfish.us website, ranging from a 4K UHD video encoded using the H.264 codec with a bitrate of 120 mbps to a HEVC 10-bit version of the same video with a bitrate of 400 mbps.

I found that I was able to stream 4K H.264 videos from a shared network drive over WiFi at bitrates up to 250 mbps (H.264), but playback started to stutter when I switched to HEVC videos. So I loaded the highest quality files onto the NucBox SSD and I was able to stream them with noticeably less stuttering. So it seems likely that the WiFi network was more of a limiting factor than the computer’s video rendering capabilities.

For what it’s worth, when I tried streaming 4K video from YouTube using Windows and Ubuntu, the computer simply couldn’t handle it. I did not replicate this test with LibreELEC, because setting it up to access YouTube is a bit of a headache.

But I was able to confirm that 4K video playback is supported with LibreELEC and Kodi… and also with Ubuntu or Windows and Kodi. When I tried playing the same 400 mbps/10-bit HEVC file using Kodi or VLC using both of those operating systems, the video played… with occasional evidence of a dropped frame or two.

So you probably don’t need LibreELEC if you want to play 4K video. But it’s a pretty handy way to use this $200-ish mini PC as a media center that boots straight into a TV-friendly multimedia application.

I feel pretty confident that the NucBox would make a decent media center PC for anyone with a 1080p TV. If you want a 4K-capable device, this little computer can certainly handle some UHD videos when the conditions are right. But I cannot promise that it will be able to handle every local video file or streaming media source that you throw at it.

Just keep in mind that the little computer does have a fan which can be audible at times. It’s quiet enough that you probably won’t notice it while playing music, but it may be audible during quiet parts of movies if you sit too close to the NucBox. If you’re looking for a completely silent media center, a fanless devices is the way to go.

For more performance notes, check out Liliputing’s GMK NucBox review, or visit our article about running Ubuntu on the little PC. And here’s a list of some of the computer’s key specs:

The GMK NucBox is available for purchase from Amazon for $200 and up, or from GMK for $209 and up (when you use the coupons shown at the top of the page).