But fifteen years ago Google was pretty much just the world’s most popular search engine (and working behind the scenes to become one of the biggest players in the internet advertising space).

On April 1st, 2004, the company announced a new product: a free email service that offered users more than 100 times more storage space than you’d get from most competitors. People thought it was an April Fools’ Day joke at first, but over the years Gmail has become one of Google’s most widely used products. And in time for its birthday, Google is announcing a few new features. 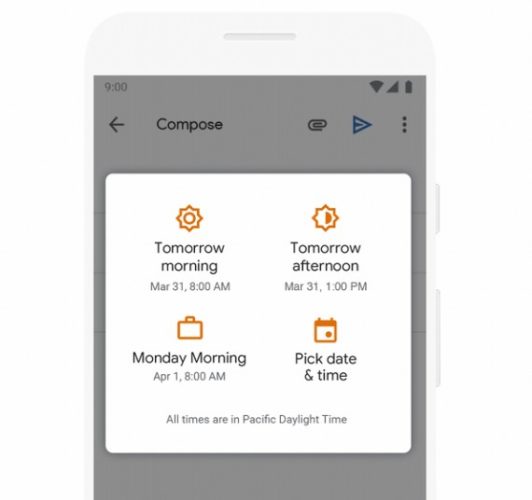 One of those new features is the ability to schedule emails for future delivery. You can write an email today and have it delivered on your friend’s birthday so they’ll think you’ve remembered even if you’ve forgotten.

It can also help if you want to send an email to someone in a different time zone and make sure it arrives when they’re awake and/or likely to be in the  office.

Or you can compose thank you emails, reminders, or anything else you can imagine when you’re ready… but schedule them to deliver at an appropriate time.

The new “Schedule Send” option will let you pick from a few defaults like “tomorrow morning” or “tomorrow afternoon” or select a specific date and time.

Another major update is support for interactive emails. Not every message will support the new features, but items sent using Google’s new AMP for Gmail technology will let you do things like RSVP to events, respond to comments, or even browse for hotel rooms without leaving Gmail.

Google also says Smart Compose is adding support for new languages, new devices, and new personalization features to help save time as you’re typing by recommending words, phrases, and even subject lines as you type.

You can read more about the new features in Google’s blog post.

Oh, and while it makes sense for Google to celebrate Gmail’s birthday, the timing is likely going to strike some folks as annoying. The company announced last fall that it would be shutting down Inbox, an alternate app that offered an alternate user interface and advanced features for managing Gmail.

Tomorrow’s the day Google officially pulls the plug on Inbox.

One reply on “Gmail turns 15, finally lets you schedule emails for future delivery”