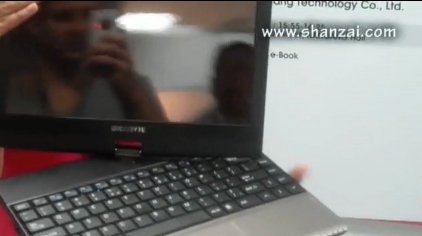 Gigabyte is showing off its new 11.6 inch M1125 convertible tablet-style notebook at Computex this week, and the folks at Shanzai.com caught up with Gigabyte to take a quick look.

While the tablet doesn’t actually boot in the video below, you can get a pretty decent idea of the size and design. While the Gigabyte M1125 is clearly larger than the 8.9 inch and 10 inch tablets Gigabyte had launched previously, it’s still fairly small and portable by notebook standards. And unlike the earlier models, the M1125 has a full sized keyboard and an Intel CULV processor.

But the most interesting part of the video comes near the end, when the Gigabyte rep mentions that the company has another product planned, which will be more “like the iPad.” While there are no additional details at the moment, it sounds like Gigabyte might be preparing to throw its hat in the Android tablet ring with a device that might not have a physical keyboard attached.