The Intel NUC (Next Unit of Computing) is a platform for a tiny desktop computer that measures just over 4″ x 4″ and which features an Intel Core i3 processor. But that’s not good enough for Gigabyte.

The PC maker has taken Intel’s design and tweaked it by adding support for Core i5 or Core i7 chips, among other things. 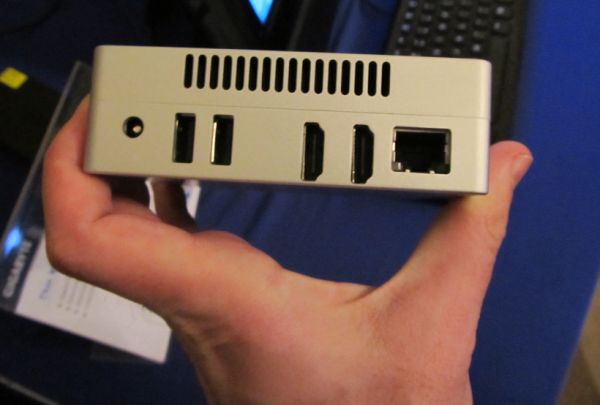 In order to do that, Gigabyte added a few more vents to the case than Intel’s NUC normally has. But that’s not all the company added: The Gigabyte mini PC also features support for USB 3.0, while Intel’s model tops out at USB 2.0.

There are also HDMI input and output ports, an Ethernet jack, and WiFi.

Gigabyte is showing off a prototype, but the final design might look a little different by the time the PC ships in April.

While the company hasn’t yet announced a price, Gigabyte says the mini PC will be priced competitively — at least for an entry level model. With support for up to 8GB of RAM, a Core i7 chip, and a 256GB solid state disk, a top-of-the-line model will probably cost a few bucks more than the $499 Velocity Micro Edge Mini, another mini-desktop based on Intel’s NUC.

17 replies on “Gigabyte tweaks Intel NUC, designs mini-desktop with up to Core i7 CPU”