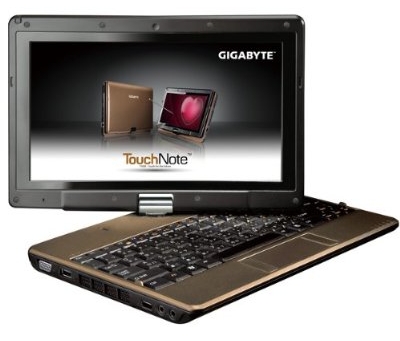 The Asus Eee PC T91 and Intel Classmate PC 3 (aka CTL 2Go PC and other rebranded netbooks) aren’t the only touchscreen netbooks available in the US anymore. Gigabyte is bringing its TouchNote T1028 netbook to America, and you can pick it up today for $599

The Gigabyte Booktop M1022 is also now shipping in the US. This $449 netbook

has pretty standard specs including an Atom N280 CPU, 10.1 inch, 1024 x 600 pixel display, 6 cell battery, and Windows XP. But its one claim to fame is a docking station that lets you connect a keyboard and mouse in order to user the netbook as if it were a desktop computer.

In other news, Portable Monkey reports that Gigabyte has launched a WiMax capable version of the TouchNote in Taiwan called the TouchNote T1028X.

3 replies on “Gigabyte TouchNote, Booktop now available in the US”