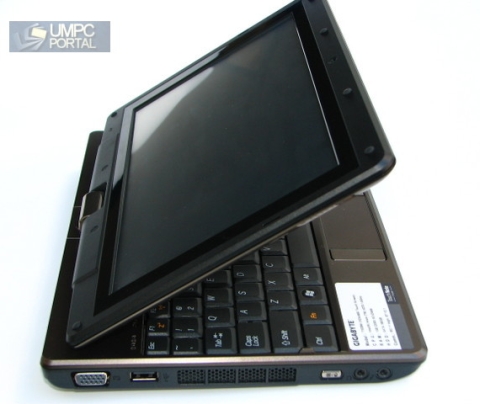 The Gigabyte Touch Note T1028M is one of a handful of new netbooks out scheduled for release in 2009 that has a touchscreen display that can be folded over the keyboard for use in tablet mode. But while Asus, Acer, and other netbook makers are developing their first touchscreen netbooks, this is Gigabyte’s second go at the form factor. The company released the Gigabyte M912 8.9 inch convertible touchscreen netbook in 2008. And according to Chippy at UMPC Portal, Gigabyte learned a lot from its experience with that model and built a much better machine in the 10.1 inch Gigabyte Touch Note T1028M.

He’s been testing a Touch Note for the last few days. While we already knew that the netbook had stellar specs (including the touchscreen, an ExpressCard/34 slot, a SIM card slot and 3G antenna, Bluetooth, and 802.11n WiFi). But Chippy found that it also has a fast 2.5 inch hard drive and that the UMTS 3G modem offered stellar reception.

The battery lasted about 2.5 hours to 4 hours depending on usage which is respectable if not spectacular. And the glossy screen does reflect glare under some lighting conditions. But other than that, Chippy had few complaints. Personally, I’m not a big fan of placing the touchpad buttons on the left and right side of the touchpad instead of below. But since the Touch Note has a touchscreen display, giving you another method for interacting with the screen, I could probably learn to live with the awkward touchpad layout.