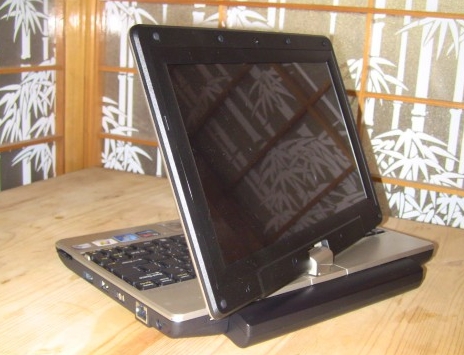 The Gigabyte T1005 may look a lot like the T1028X I reviewed last year, but under the hood the new model packs a bit more punch. Like its predecessor, the T1005 features a 10.1 inch, 1366 x 768 pixel display which you can flip around and fold down over the screen for use in tablet mode. But while the T1028x has a resistive display, the new model has a capacitive touchscreen which is easier to manipulate with your fingertips. The new model also has a more powerful 1.5GHz Intel Atom N550 dual core CPU.

Nicole from Netbook News has posted a review of the Gigabyte T1005, which also has 2GB of RAM, a 320GB hard drive, and runs Windows 7 Home Premium. It also has a few premium features you won’t find on most 10 inch mini-laptops, including a USB 3.0 ports, Express Card slot, and a combo eSATA/USB port.

Nicole reports that the hinge feels sturdier on this model than earlier versions, and that the keyboard is decent, although the shift keys are rather small. She also says the touchscreen felt a bit laggy at times — which may be an issue that can be addressed with a software update rather than a physical limitation of the hardware.

For more information on video performance, battery life, and overall performance, check out the full review at Netbook News. You can also check out Nicole’s video review after the break.