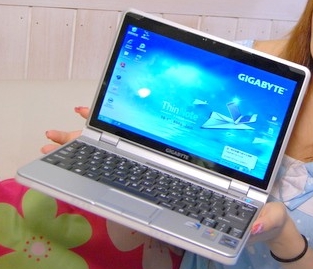 A few months ago Gigabyte announced three new 10 inch netbook models. The touchscreen tablet-style TouchNote T1028 has already been shipping for a little while, as has the Booktop M1022. Now it looks like the third model, a thin and light netbook called the S1024 is shipping in Hong Kong. It may also be called the Myou, or the ThinNote, depending on the day of the week.

This netbook’s claim to fame is the fact that it measures less than an inch thick and weighs less than 2 pounds. On the down side, in order to keep it thin and light, Gigabyte saddled this little laptop with an 80GB 4200rpm hard drive and a 3600mAh battery. While the battery is estimated to run for 4 hours, it’s one of the lower capacity 6 cell netbook batteries I’ve seen in a while.

Update: Just in case you were wondering if this little guy was slated to hit US shores anytime soon, I just checked in with Gigabyte and the answer is no. There are no plans to release the S1024 in the US. So you’ll just have to make due with the Gigabyte TouchNote T1028 or Booktop M1022 if you want a Gigabyte netbook in America.