Most computer motherboards from companies like Asus, MSI, and Gigabyte feature sockets that let you connect any compatible CPU as well as slots for adding memory, storage, and other components.

Meanwhile, single-board computers like the Raspberry Pi tend to have both the processor and the RAM soldered to the system board.

And then there’s the Gigabyte GA-SBCAP3350. It’s a new board that seems to split the difference: it has an Intel Celeron N3350 dual-core processor built in, but lets you bring your own RAM and solid state storage. 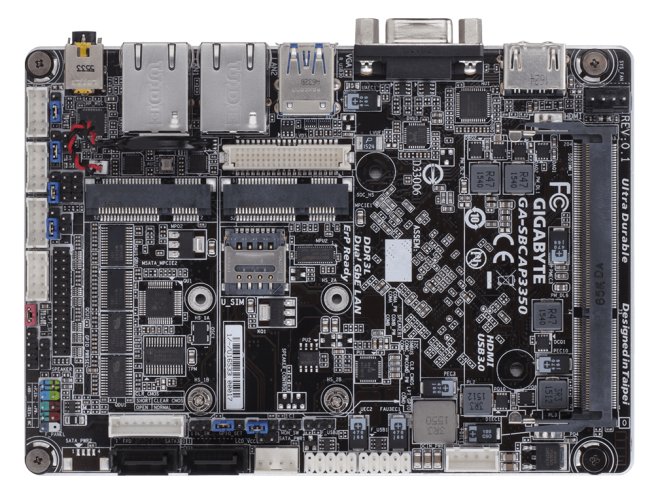 There’s a single-channel DDRL SO-DIMM slot that supports up to 8GB of DDR3L-1333/1600/1866 RAM (the maximum that the Celeron N3350 chip can handle). There’s also a mini PCIe slot that you can use for an mSATA solid state drive and a second mini PCIe slot for a half-length wireless card.

Other features include two USB 3.0 ports, dual Gigabit Ethernet ports, and a number of internal headers for USB 2.0, SATA, GPIO, and other I/O connections.

There’s also a large heat spreader covering one side of the board, which should help keep the low-power computer cool without the use of fans. But if you want to use a fan, there’s a system fan header as well.

While I get the feeling this board is designed for enterprise solutions such as digital signage and point-of-sales systems, it could also be an interested option for anyone interested in building a small, quiet, customizable home computer… assuming you’re satisfied with the performance of the 6 watt Celeron N3350 processor, because that’s the one thing you cannot upgrade.

Gigabyte first unveiled the GA-SBCAP3350 earlier this year, but the company just added product details to its website this week. There’s no word on when it will be available for purchase or how much it will cost when it does.