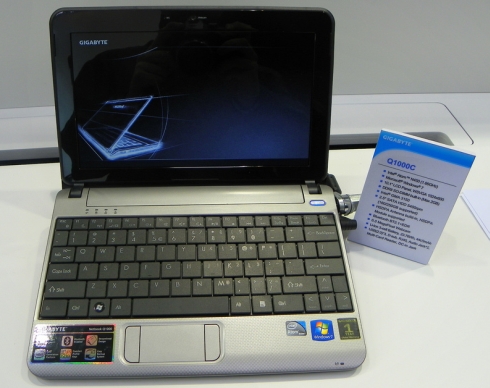 Asus isn’t the only company on a netbook launching spree today. Gigabyte also has at least three new models on display at CeBIT this week. In addition to the T1000 convertible tablet style netbook, Gigabyte it introducing the new Q1000C and M1000 series netbooks.

Sascha from Netbook News.de has a hands-on video which you can check out after the break. He points out that the new model also has chiclet-style keyboard and a 6-cell battery. Like it’s predecessor, the M1000 features a docking port for connecting to a docking station. And it features an ExpressCard slot, which is a hallmark of Gigabyte netbooks.

This is a new model, featuring a 1.66GHz Intel Atom N450 processor and a 10.1 inch, 1024 x 600 pixel display. This notebook appears to have a rather small touchpad with buttons on the left and right sides rather than below the touch area. This kind of design used to bother me a lot — until I started using touchpads that have no physical buttons and instead require you to push down on the left and right sides of the touchpad itself. Those are far harder to use.

The Q1000C has 1GB of RAM, a 160GB or 250Gb hard drive, Bluetooth 2.1, 3 USB ports, VGA, and Ethernetjacks, and an optional HSDPA module. Unlike most other Gigabyte netbooks I don’t see an ExpressCard slot, which leads me to believe this is probably the budget model. There’s no word on pricing or availability though.

Jkkmobile has a brief video of the Q1000C, which you can also see after the break.