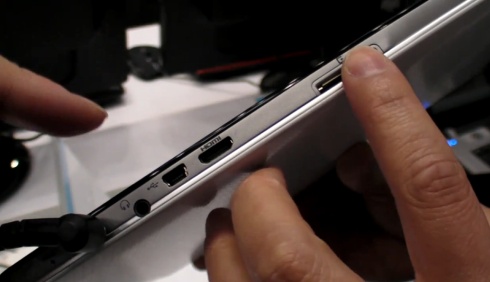 Gigabyte introduced a new Windows slate PC called the S1080 in January, sporting a shiny new Intel Atom N570 processor, capacitive touchscreen, and a suite of touch-friendly applications. But it looks like Gigabyte’s not pinning all its hopes on Windows tablets with x86 chips. ARMdevices spotted a new Android tablet from Gigabyte at CeBIT this week.

The Gigabyte GN-TB100 has a 10.1 inch, 1280 x 800 capacitive touchscreen display and a dual core NVIDIA Tegra 2 processor. It’s not due out until July, and the company expects to refine the design. The prototype has a rather large screen bezel which I suspect will shrink by the time the tablet goes on sale.

The prototype has up to 1GB of RAM, up to 32GB of storage, and 802.11b/g/n WiFi, Bluetooth 2.1, and 3G connectivity. It has a 5MP rear-facing camera and a 1.3MP camera on the front. And the display is an IPS screen which should offer decent viewing angles.

For now the tablet is running Android 2.2, but it will likely run Google Android 3.0 Honeycomb by the time it hits the streets this summer. There’s also a good chance that Gigabyte will only be the OEM for this particular tablet, meaning you’ll see it repackaged with a different brand name by the time it’s available in stores.