Gigabyte’s BRIX computer is a tiny desktop computer that’s just a little wider than a standard CD case. Under the hood it packs an Intel or AMD processor, up to 16GB of RAM, and a solid state drive for storage.

The small size make the BRIX an obvious choice for use as a home theater PC, but it could also be used anywhere else where space is a premium.

It turns out Gigabyte even has a model that doesn’t require a monitor — because it has a built-in projector. 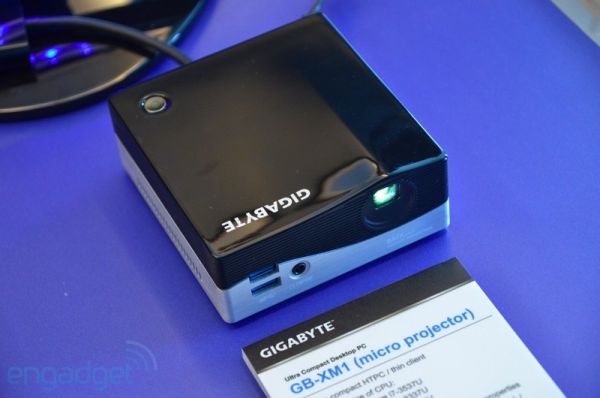 Engadget Chinese spotted the Gigabyte BRIX GB-XM1 with a micro-projector at Computex in Taiwan last week.

It’s a little thicker than other members of the BRIX family, but it has a WVGA projector built-in, which lets you shine a display on a wall or screen. You can use it to watch movies, show presentations, or generally use the computer without a screen.

Just don’t expect any miracles. The projector only offers 50 to 80 lumens of brightness, which means that unless you’re in a pretty dark room you won’t see much. And the WVGA resolution means you’ll only get about 800 x 480 pixels.

Still, it’s a neat value-added feature for this tiny computer. You can always plug in a standard display for day-to-day use. Gigabyte plans to offer models with Intel Celeron, Core i3, Core i5, and Core i7 chips.