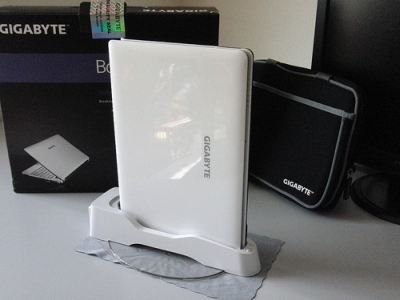 The Gigabyte TouchNote T1028X is nice and all, but it costs nearly $700. If you’re looking for something a bit more affordable from Gigabyte, and don’t care so much about the touchscreen, the company’s Booktop M1022 might be more up your alley. At $498

, it’s still not the cheapest netbook around, but the Booktop M1022 has one feature you won’t find from any other netbook: A docking station that lets you plug in a mouse, keyboard, and other peripherals and use the netbook as a desktop PC.

The docking station doesn’t really include any ports that you can’t already find around the sides of the computer itself. But it does allow you to leave your peripherals plugged in so that all you need to do is drop in the netbook to start computing almost instantly.

Matze at Netbook News.de recently got his hands on a Booktop, and he seems pretty happy with it. He’s posted a series of unboxing photos plus several videos he shot exploring the system. The videos are in German, but even if you don’t speak the language, you get a pretty good idea of what the computer looks like and how it works.

Spec-wise, the Gigabyte Booktop isn’t anything too special. It has a 1.66Ghz Intel Atom N280 CPU, 10.1″ 1024 x 600 pixel display, 1GB of RAM, 160GB hard drive, 6 cell battery, and Windows XP. It does pack an ExpressCard slot, which isn’t that common in netbooks, but the only other special feature is the docking station.

You can check out the videos after the break. And you can read more about the Booktop M1022 in the Liliputing Product Database.