Giada’s been offering small form-factor desktops for a few years, often with low-power Intel Atom processors. One of the company’s newest models packs a bit more punch, thanks to an Intel Core i5-4200U haswell processor. But the Giada F300 still smaller than many hardcover books — and it should be virtually silent since it uses passive cooling instead of noisy fans. 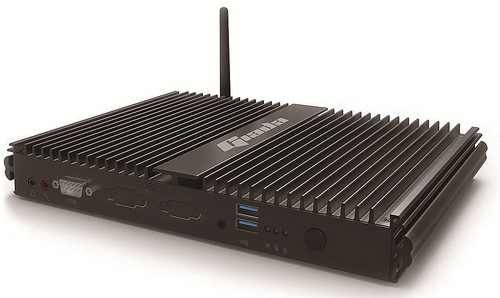 Both models feature heat-sinks built into the case to help dissipate heat without fans. They also feature integrated Intel HD graphics, 2.5″ drive bays and mSATA ports for storage a few USB ports, Ethernet jacks, and VGA or DVI ports, depending on the model.

It looks like both the Giada F300 and F310 will be sold as barebones systems, which means you’ll have to supply your own memory, storage, and operating system.

While Giada’s computers are build in China, you can sometimes find models in the US. Newegg sells a selection of older Giada boxes, some with prices as low as $136.

4 replies on “Giada F300 is a small, silent Haswell desktop”