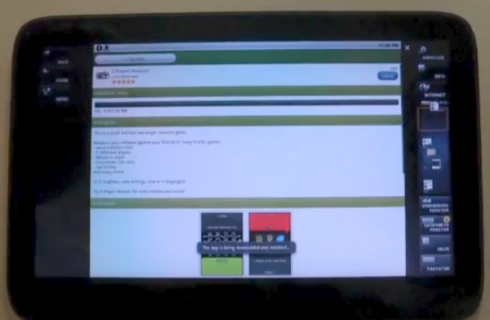 The Neofonie WeTab is an 11.6 inch tablet with an Intel Atom processor, a 1366 x 768 capacitive multitouch display. It’s expected to go on sale in Germany soon, and the folks at AndroidPIT.de have managed to get their hands on one of the first units and they’ve posted an unboxing and first look video to prove it.

The retail packaging looks decent, but the showstopper is the custom user interface.

The WeTab runs a custom version of MeeGo Linux, but it can also run Google Android as a virtual machine from within MeeGo. In other words, you can run Linux apps or Android apps on the tablet.

Like most Android tablets, the WeTab won’t have full access to the Google Android Market, but instead ill run AndroidPIT’s third party app store, which is designed to make downloading and installing third party apps just as easy — even if the selection isn’t quite as comprehensive.

Update: Carrypad reports that at launch the tablet won’t include the AndroidPIT app store or Intel’s AppUp Center for MeeGo, although both should be available for download later.

You can check out the first look video after the break.