Folks have been rooting some versions of the Samsung Galaxy S5 since shortly after the phone was released earlier this year. Unfortunately if you got your phone from one of the two largest US wireless carriers, you’ve probably been stuck with a locked bootloader and an unrooted device… until now.

Developer Geohot, best known for numerous contributions to the iPhone and Playstation hacking communities, has released a new tool called towelroot that can root the Verizon and AT&T versions of the Galaxy S5.

It’ll also root a number of other devices and has been tested with the Galaxy S4 and Nexus 5, Galaxy Note 3, and Geohot suggests it might work with just about any Android phone running a kernel from before June 3rd. 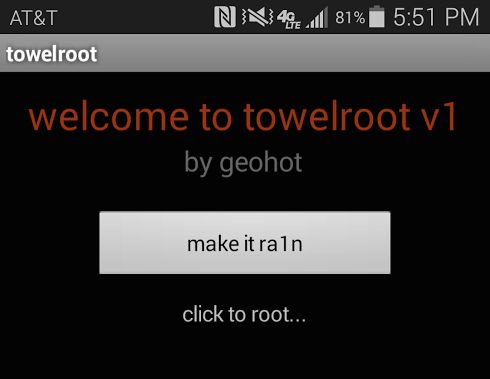 Using Towelroot is ridiculously easy. Visit towelroot.com, click the lambda icon to download the apk file, install it on your phone, and run it.

The tool relies on a security vulnerability in the Linux kernel, so it should work with any phone or tablet that’s not running a newer version of the kernel with the software patched. In other worse, Towelroot might not work forever — so if you want to root your AT&T or Verizon phone, it might be a good idea to do it before you download your next over-the-air update.

Note that you may void your warranty by rooting your device… and if you don’t know what you’re doing, you could leave your phone or tablet a bit less secure. On the other hand, you also gain more control over your device as well as the ability to run apps that require root permissions such as Titanium Backup, Xposed Framework, or Root Explorer.

Update: Towelroot also turns out to be the first publicly released tool that can root the Amazon Fire TV.