The Gemini PDA is a handheld computer designed to run Android and Linux, function as a phone, and feature a keyboard inspired by the classic Psion series of palmtops.

While some early reviews are pretty positive, some folks have reported a number of issues, including problems with the keyboard, USB ports, and more.

There’s at least one issue that Planet Computers has confirmed: the first 1,000 units manufactured have a different CPU than expected. 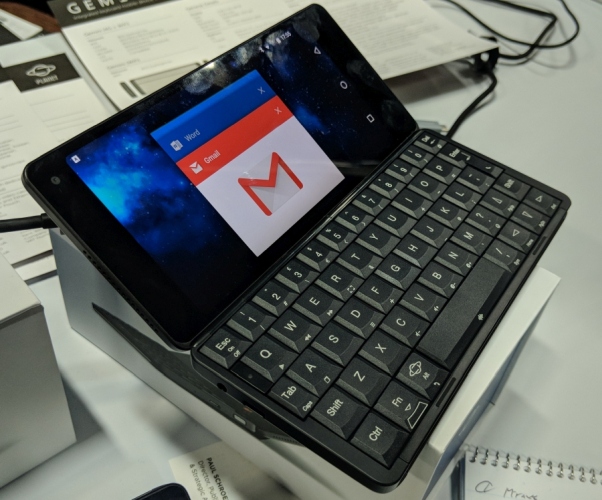 When the company first introduced the Gemini PDA, the plan was to deliver a device with a MediaTek Helio X25 deca-core processor. But eventually Planet Computers updated the Indiegogo page to state that the device would instead feature a slightly faster MediaTek Helio X27 chip.

It turns out that the factory went ahead and built the first thousand units using the X25 processor instead.

Planet Computers says all Gemini PDAs produced from here on out will feature the X27 chip. As for the folks who’ve already received a model with the wrong processor? Tough luck.

On the bright side, Planet Computers notes that its shipping devices on a first-pledged, first-served basis. And that means everyone getting a lower-specced model actually pledged back when the company thought that all Gemini PDAs would feature an X25 processor. So they’re kind of getting what they asked for.

But another way to look at that is that early supporter who backed the project before it was clear if it would make its goal are getting inferior hardware to the version than will ship to folks who waited longer before making a pledge. Needless to say, the comments page on the Gemini PDA Indiegogo campaign are filled with messages from disappointed backers at the moment.

It’s not unusual for companies to change the specs of a crowdfunded project. While Planet Computer had promised to switch to a more powerful processor, the company also made the following changes to the Gemini PDA specs before shipping:

That last one might not be entirely fair: the company is working on bringing support for multiple GNU/Linux distributions. But it’s still a work in progress and that means users will have to load the operating system of their choice rather than getting a mini computer that’s preconfigured to run Linux out of the box.

Users have also noted that the Gemini PDA was also supposed to ship with a compass feature, but while the sensor is there, Planet Computers says it’s been disabled because of interference from the magnets that keep the device closed.

All told, the Gemini PDA is still a pretty exciting device, because there’s really nothing else quite like it on the market today. The closest competitor is probably the GPD Pocket, which is a tiny laptop computer with a 7 inch display, an Intel Atom Cherry Trail processor, and Windows 10. But the GPD Pocket is a little bigger than the Gemini PDA, doesn’t make phone calls, and has a different keyboard layout.