Smart speakers, home automation, robots, and wireless chargers abound at this year’s Consumer Electronics Show. But if you look hard enough you can also find vendors showing off their latest laptop, tablet, and desktop PC designs.

Most of the models I’ve spotted so far are still equipped with Intel Atom Cherry Trail chips or Celeron and Pentium chips based on Intel’s Apollo Lake architecture. But some equipment manufacturers such as Foryou Digital are showing off devices that they say will be available with Intel Gemini Lake chips in the second quarter of 2018. 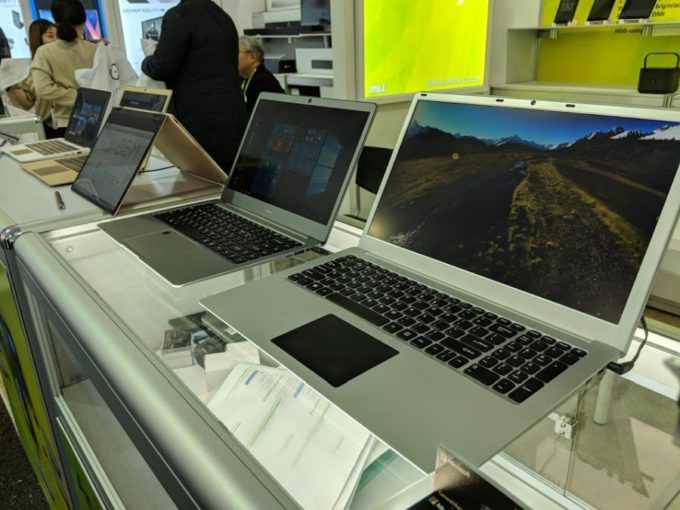 Gemini Lake is the successor to Apollo Lake. Intel has unveiled 6 Gemini Lake chips so far, including 3 that feature 6 watt TDPs that are most likely to be used in laptops and tablets, and 3 chips that use 10 watts, which are more likely to show up in mini desktop computers… like Intel’s new June Canyuon NUC mini PC.

The processors include native support for HDMI 2.0, support for 10-bit HEVC and VP9 video decoding, and a new Local Adaptive Contrast Enhancement feature that could help make laptop displays easier to view in sunlight.

In terms of overall performance, you can probably expect a slight performance boost thanks to higher boost clock speeds, new instruction sets, and more cache.

Foryou Digital says it plans to use Gemini Lake Celeron chips in its laptops and 2-in-1 tablets, but not the new Pentium Silver processor. The company is an OEM that makes white box hardware that’s sold under different brand names. So the company couldn’t tell me what the retail prices will be for its upcoming Gemini Lake laptops.

The models Foryou has on display are pretty nice looking for low-end machines, with features including all-metal chassis, fingerprint readers, and full HD displays on some models. They’re just some of the many portable computers with Gemini Lake chips we’re likely to see later this year (although the demo units on display are still mostly using Cherry Trail or Apollo Lake processors).

Here’s a quick overview of the company’s CES booth:

One reply on “Gemini Lake laptops are coming”