Spanish device maker Geeksphone was the first company to sell smartphones designed to run Firefox OS. But the Geeksphone Keon and Peak handsets were aimed at developers looking to test and write apps for Mozilla’s new mobile operating system.

Now Geeksphone plans to launch its first phone for consumers, and it may also be the most powerful Firefox OS phone to date. 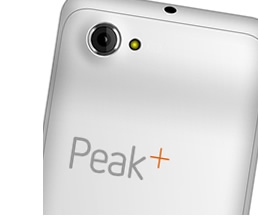 The company’s latest newsletter describes the upcoming Peak+ as an “improved version of the Peak.” Unlike its predecessor, it’ll be designed for “end users” as well as developers.

While the company hasn’t yet listed the specs for the new model, Geeksphone says customers will get 25GB of cloud storage that they can use to store their data and keep their devices synchronized.

It’s based on a reference design from Mozilla, but there’s always room for improvement, and the company says the Peak+ will take into account suggestions from the community of folks that have already been using the Peak.

Meanwhile the first Firefox OS smartphone which went on sale in Europe this month have lower-end specs including a 1 GHz Snapdragon S1 processor, 480 x 320 pixel displays and just 256MB of RAM.

In other words, Firefox OS is designed to run on devices with specs straight out of 2009. But like most operating systems, it’ll probably run better on devices with faster processor and more memory. So it’s nice to see a company stepping up to the plate with a higher-end option for folks that want to spend a little more money on a Firefox OS phone.