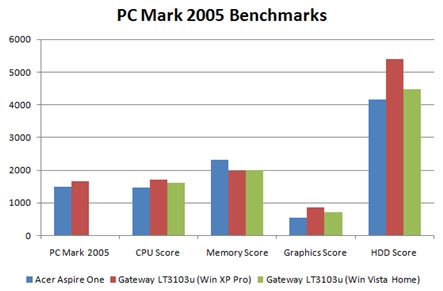 The Gateway LT3100 series of laptops sport 12 inch displays and underpowered processors. But there are a few things setting them apart from most netbooks. First, the Gateway LT3100 packs an AMD Athlon 64 L110 CPU and ATI Radeon X1270 graphics instead of Intel’s Atom or VIA’s Nano or C7-M platforms. Second, the Gateway machines ship with Windows Vista instead of XP.

That means it can come with more RAM and storage than most netbooks, and the LT3103u model that’s available from Best Buy ships with 2GB of RAM and a 250GB hard drive.

We’ve already seen a basic review of the LT3103u, and the verdict was that the $399 machine does most of the things you’d expect a netbook to do. Now NetbookTech has picked up one of the Gateway laptops and put it through a battery of benchmarks. The results? Meh. An Intel Atom-powered Acer Aspire One scored higher on a number of performance tests, although the Gateway LT3103u seems to do better on hard drive and memory tests.

It’s worth noting that NetbookTech installed Windows XP on the laptop and found that it performed significantly better on most of the tests with Windows XP Pro than Windows Vista Home Basic.

The ATI Radeon X1270 graphics processor does outperform Intel’s integrated GMA 950 graphics, but it’s still a pretty lousy GPU overall. Like most Atom powered netbooks and notebooks with 1366 x 768 pixel displays, the LT3013u struggles with full screen Flash video from Hulu, YouTube and other sites, and forget about playing HD Flash video, although HD video should play just fine from your hard drive.

NetbookTech says the battery should be good for about 4 hours of run time.