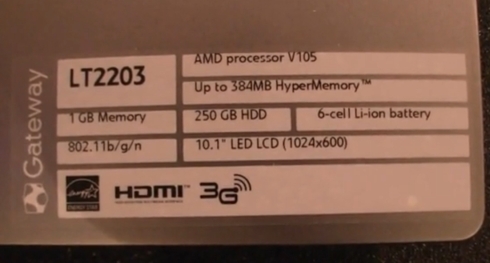 If the Gateway LT2203 netbook looks kind of familiar, that’s because it’s basically just a rebranded Acer Aspire One 521. Acer owns the Gateway brand and has a tendency to release the same netbooks two or three times (sometimes under the Packard Bell name). I have no idea why.

Anyway, the Gateway LT2203 made an appearance in San Francisco this week at the Netbook Summit, and Johannes from NewGadgets.de spent some time with it.

You can check out a hands-on video with the netbook after the break. It shows the netbook playing a video game with 3D graphics.