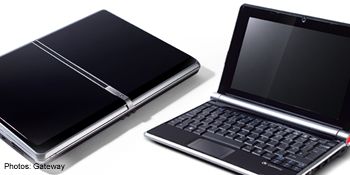 It’s been a while since the Gateway brand name alone was enough to convince many people to buy a computer. But if you trust Gateway more than Acer, the company is apparently launching a new netbook that looks exactly like an Acer Aspire One (because that’s pretty much what it is on the inside, and oh, did I mention that Acer owns Gateway now?) but under the Gateway name.

Anyway, the Gateway LT1001G has all the things you’d expect from a modern netbook including a 1.6GHz Intel Atom CPU, an 8.9  inch, 1024 x 600 pixel display, 1GB of RAM and a 160GB hard drive. It also has a few things that you won’t find on every Acer Aspire One model. For example, a source tells me that it packs an integrated 3G modem, which you’ll find in some versions of the Acer Aspire One, but certainly not in all units.

The  Gateway netbook will be run about $688 in Singapore, or the equivalent of $458 in the US. It’s not clear whether Gateway plans to release the netbook worldwide.