GPS equipment maker Garmin’s latest device looks a lot like an Android smartphone. but it doesn’t make calls and doesn’t support cellular data. Instead it’s rugged handheld GPS device designed for outdoor use — but you can also use it to download and run apps and games from the Google Play Store. 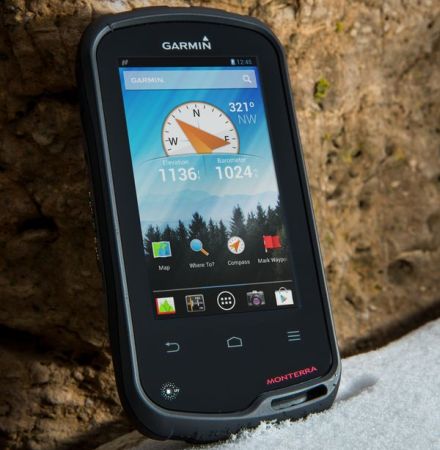 The Garmin Monterra features a 4 inch touchscreen display, 6GB of storage, and a microSD card slot. It supports WiFi, Bluetooth, and NFC, as well as FM Radio. And of course it has a GPS and GLONASS receiver.

It can also receive weather alerts from NOAA.

The device has an 8MP camera with an LED flash which you can use to shoot 1080p video or snap photos with geo-tagged information.

Unlike most Android devices, you can power the Garmin Monterra with AA batteries, or you can use the included Li-ion battery pack. Also unlike most Android phones and tablets, the Monterra is a rugged device, with an IPX7 waterproof rating. That means it can be immersed in up to a meter of water for a half hour, which should be more than enough for a hiking or biking trip where it’s more likely to get splashed or rained on.

Garmin says the Monterra will be available within the next few months for $650 and up.

While that might seem kind of pricey by Android phone standards, good luck finding a phone with all the features available in this outdoor GPS device.